I have just returned from my travels on the edge of the frozen wasteland known as the Dreadlands, a once-beautiful place forever changed by some great calamity in its history. Now, only ruined cities and bleak landscapes remain, no place for any living thing. I was headed for the village of Bronn for the night, but when I arrived, I found a scene of devastation such as I had never seen before. I should have fled at the first sign of danger, but my curiosity drove me forward. Most of the town's buildings had been burnt to their foundations, and a few charred timbers were the only sign of where they had once stood. Ash choked my lungs. There were bodies strewn everywhere, many dismembered and some even half consumed. The city was abandoned. 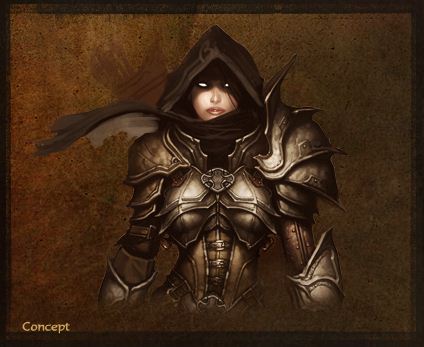 Or so I thought.

From the husk of the inn, one of the few buildings still standing, monstrous, gray-skinned creatures burst forth, shouting in some infernal tongue. They were masses of misshapen flesh, of sinewy muscle made for battle. Helpless, I stood frozen as they drew close. The one in the lead seized me by the front of my cloak and lifted me from the ground, its claws tearing through fabric and skin. Its breath was hot on my face, and I was assaulted by the putrid smell of rotten flesh. Its mouth yawned wide, and I saw rows of sharpened teeth, yellowed and stained with blood. I thought only of the shame that my voice would be silenced, never to illuminate another of the wonders of our world for you, my loyal readers.

A sharp sound whistled by my ear, and a crossbow bolt sprouted from the eye of the beast before me, spraying my face with its burning blood. It howled an inhuman cry of pain and threw me to the ground, grabbing at the quarrel. The other creatures scanned for this unseen attacker, and I was forgotten for the moment. From the ground at their feet, I tore my head around to see where the bolt had come from. 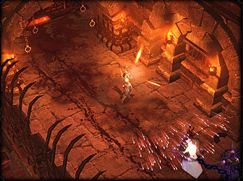 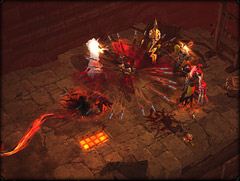 That was when I saw a demon hunter for the first time.

The girl could have been no more than twenty. She emerged from the shadows cast by the setting sun and wasted no time in dispatching the rest of my attackers. Her hands worked twin crossbows, launching a glowing arc of flaming bolts over my head, blanketing the hulking monsters. Every shot found its mark in one of the horned beasts, felling the lot of them. From the corner of my eye, I saw more of the savage brutes sneaking up on her from behind. My voice froze in my throat as I tried to scream a warning. I needn't have worried: she was not unaware. The hunter reached into her belt and rolled a trio of strange metal spheres into their path. The monsters looked down just as the contraptions exploded into light and flame, stunning them. It gave her enough time to round on them, her crossbows dispatching them one by one. 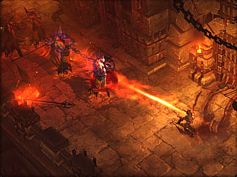 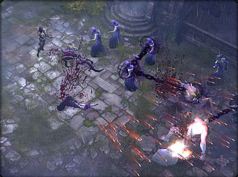 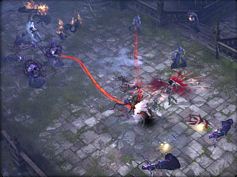 With a last look over the town, apparently satisfied that no danger remained for her, she came forward, shaking her head sadly. There was a look of profound disappointment on her face as she returned the crossbows to her sides, hidden by the folds of her cloak.

"No survivors," she said bitterly.

They call themselves the demon hunters, a group of fanatical warriors sworn to a single purpose: the destruction of the creatures of the Burning Hells. The demon hunters number in the hundreds and make their home in the Dreadlands so that they can live and train without the interference of any nation that would worry over having such a fearsome group camped within its borders (though at any time over half are dispatched across the world like this girl, seeking hellspawn). There is something in all demon hunters that gives them the strength to resist the demonic corruption that would drive lesser men to madness. They hone this power, for their resistance to this taint enables them to use the demons' power as a weapon. But their mission and their power are not all that bind them together. 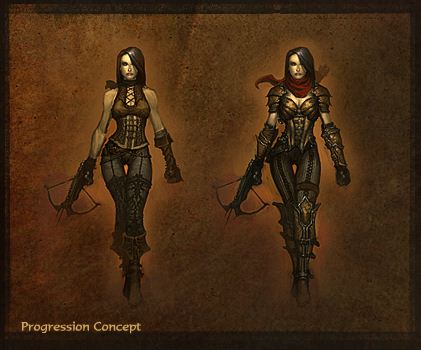 That night, the girl told me of her life, about how, as a child, the demons had descended upon her town. She had watched as demons destroyed her home, setting her village to the torch. They murdered everyone she knew and stole from her everyone she loved. She should have died with them, but she fled, hiding from the hellspawn for days until she was found by a demon hunter who saw the strength in her and took her in as one of their own. Each and every demon hunter, she told me, has a story like this.


They are the survivors, and they are searching for vengeance.