As I was preparing to set pen to paper to begin recording my thoughts at the beginning of my epic undertaking to gather the world's knowledge together in one tome, the hand of providence tapped me on the shoulder. The news that a rogue burrower had killed a citizen just outside the city gave me the wonderful opportunity to see firsthand one of the more disturbing creatures we share this world with – the savage dune thresher.


Long ago driven away from settled locales to the deep desert wastes of the Borderlands, the dune thresher is rarely seen by city dwellers. Every so often, however, whether due to injury or old age, one of these unholy beasts ventures to the edge of civilization to feast on the frail human animal. When this happens, a professional like Franklin Burroughs, the famed guide and hunter, is called in to put an end to the threat.

Fortunately, Burroughs and I, both being men of travel and adventure, have naturally crossed paths before (frequent readers of my works will no doubt remember this grizzled, rough-hewn boulder of a man from my classic, Xiansai Chronicles). Thus, I contacted him so that I was able to take part in his quest to rid us of the burrowing nightmare. He acted reluctant at first, but I could tell he was happy to have me along. 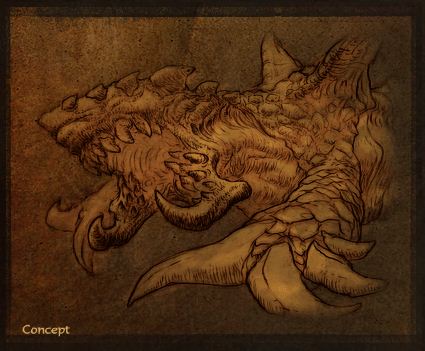 I met up with him at dusk upon the sandy rocks that ringed the Tardein wastes. As I approached, Burroughs was kneeling on the black rocks, inspecting something. I looked at the indistinguishable matter he'd been staring so intently at, but I could not identify it. He held up his hand, motioning for me to step lightly. When I asked him what the problem was, he pointed to the focus of his attention and asked if I wanted to end up like that poor fool. I laughed, thinking he was playing one of his jokes on me yet again. Everyone knew that the dune threshers attacked from under the sand, and that we were safe upon the rocks!

I looked again, and what I saw turned my stomach. The rocks betrayed the desperation with which the victim had clung to them. Left upon their bloodstained surfaces were strips of skin that had been torn from his hands and fingers.


"They'll jump right up onto these rocks and drag you down. An experienced hunter could survive an attack, but someone like you will be lunch if you keep stomping around here, making all that noise." He chuckled to himself as he made his way up to his heavily loaded wagon. 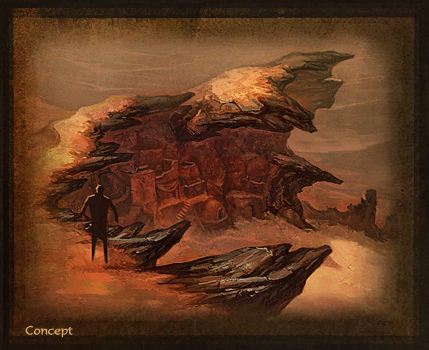 I quickly (and quietly) moved back from the edge of the rocks. And then I heard the screeching. Burroughs had retrieved a large object, a cage of some kind, covered with a black tarp. This cage was the source of the hellish emanations. Thick ropes hung down from somewhere deep beneath its dark shroud. "That's not far enough," he said. As if to prove his point, he shook the cage he was holding. Ever viler screams shot forth, cutting through my head like cold, sharp blades. But they were nothing to the sound I heard next – the deathly churning of sand that heralded the arrival of the thresher.

"Their sound riles a thresher up something fierce. Better get them into the sand before we have company up here." With that, he tore the cover off the cage. The shock of seeing what was contained within overwhelmed me immediately. Everything seemed to wash together in a kind of bland, sickening grayness, and my knees buckled.