As I began to fall, Burroughs grabbed me by the scruff of my collar and shook me violently. "You really want to feed some thresher, don't you, al-Hazir?" he asked. "What, haven't you seen scavengers before?"

I had indeed seen scavengers: small, burrowing creatures that feed upon carrion. Unlike most animals of this type, however, they are extremely aggressive and will not hesitate to attack those unfortunate enough to encounter them. Scavengers have powerful legs which they use for swift springing attacks, striking at vulnerable faces and throats. Their anatomy bears a striking resemblance to that of the leapers of the Aranoch desert, and thus, many researchers classify the two groups as part of the same family of creatures. An ensorcelled (some say demonic) variant is known to have plagued adventurers in the Tristram region twenty-odd years ago as well. Scavengers were also the cause of an extremely distressing episode during my youth, which I need not relate at this juncture. 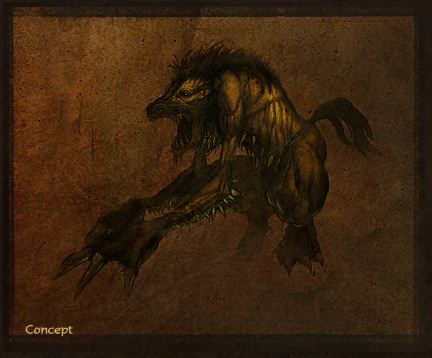 "Yep. Burrowers to catch a burrower," he said. He then took the lengths of rope hanging from the cage and impaled them on the ground using a heavy pike. He also attached what looked like long knives to the sides of his heavy, scarred boots, and drove the blades into the ground.

"You'd better get out of the way." And with that, while holding onto the ropes, he undid the latching mechanism on the side of the cage. He then threw it out onto the sand. The cage exploded outward with the scavengers' frantic attempts to escape their confines. I barely had time to wonder how Burroughs had been able to get the collars (that the ropes were attached to) around the scavengers' necks before the vicious beasts had burrowed into the soft ground.

I was extremely tense by this point. I felt naked and exposed. What insanity had convinced me that coming out here was a good idea? 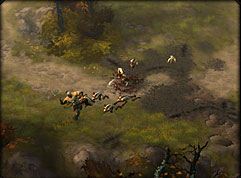 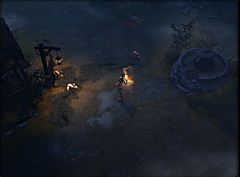 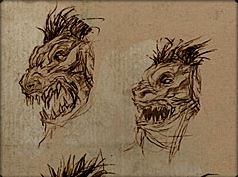 I looked out over the wastes in the fading light, trying to detect the telltale horned fins of the thresher cutting through the surface of the sand.

With absolutely no warning, the dune thresher violently broke the surface, all three scavengers caught in his horrifying maw. There was a massive explosion of sand as the thresher dove back into the ground with its prize. The ropes immediately snapped taut, and I thought Burroughs would be pulled to his death. I didn't understand how he thought he could reel in a monster that huge, but he wasn't even trying – just holding on.

"Ah. The little buggers are doing their work." He smiled a ghastly smile. "Shouldn't be long now."

A few more moments of this strangeness passed, and the thrashing of the ropes became less and less. Finally, he began to haul his catch in. When it was partially on the rocks, I could see what had happened. The thresher had swallowed the scavengers whole, and they, in turn, had begun eating their way out of the thresher's stomach before the beast's digestive juices had killed them. One scavenger still clung to life, but barely. It had actually dug itself halfway out of the thresher, clawing at the air as its skin was slowly eaten away. I vomited.

Burroughs, laughing at me once again as he cut off the beast's triangular head, began lecturing me on the amazing dune thresher: the dynamics of its jutting, angular lower jaw, which cuts a path through the soil; the way this jaw design enables the thresher to swim effortlessly beneath the sand with unimaginable swiftness; and much more that I didn't care to hear just then. I nodded my head weakly and wondered how long it would be before I could politely get myself home and crawl into bed.